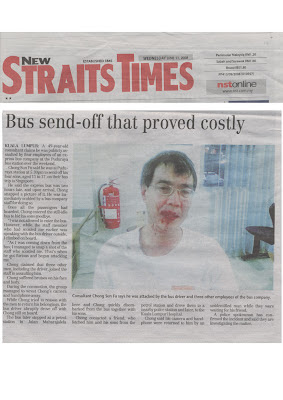 When I was assaulted by 4 men, on 7th June 2008, who were operators of a bus company in Kuala Lumpur, I learnt about the fears in the streets of our community. (Refer to Familylane ) From the rude bus operators who behaved like gangsters in ushering passengers around, it was no wonder that after I was bashed up, I could not get anyone present there to be my witness of the incident. I personally appealed to them one by one, be it a young or old man and even a religious woman with her hair traditionally covered. None would nod their head to indicate a desire to assist me. My own boys in the bus of course were willing to help especially my youngest who was surprisingly calm and said he would be a willing witness. But when my oldest boy gave out a loud cry of trauma as I sought his help to translate to an older mandarin speaking man for his help, I knew the air was tensed with waves of anxiety and fear.

I must add that coming out of the bus itself when I was finally allowed to, I must have been mentally or emotionally affected as I momentarily fainted. On the phone to my wife later in the office of the BHP petrol station where the bus had stopped , I broke down in tears expressing to my wife that I merely wanted to see to my children’s safety when I boarded the bus to help them be seated even though I was warned loudly by the man who later assaulted me not to do so, claiming that he was the bus owner. You know, I can forgive this man who must have been acting out of fear of my camera perhaps for taking his photo but no one is above the law and if he violated the law, he should be brought to justice unless I am out of date with Malaysian law. If so, no wonder the civilians in the bus who knew better, rightly acted with fear not to cooperate with me, feeling it would be a waste of time! To this date I have been trying to contact by cell phone to Inspector Kamal who was faithfully messaging me after my police report but was silent a week before I left for Beijing and I still cannot get him on my return. His last report is that he did follow up with the girl at the kiosk to identify who the man in the photo was that I posted in the blog.(familylane). I just hope there isn’t a greater force over the police that might put fear in Inspector Kamal to do his job. The incident has prompted me to follow up with the JPJ or Road transport department and the LPKP who is the licensing or enforcement division for public buses to know if they have a system of choosing quality operators to serve the community.

It is interesting that as your subconscious mind thinks about something such as the fear factor, you not only recall many things of the past that relates to it but new events occur right before your very eyes that relates to fear. They call it the ‘Law of Attraction’ and let me tell you what happened

After the incident was over and I did my full report with the police and referred the press to my blog account, I must say that I now roam the streets of Kuala Lumpur with a very sharp eye for trouble.

On the afternoon of 11th June 2008, 4 days after my bus incident, I just left my downtown apartment on my scooter and had to stop at the very busy junction at the end of Loke Yew and Jalan Imbi near the Dewan Bahasa and Pustaka building. At the stop, I noticed there was a diversion in junction for the road leading to Times Square. Now there was a traffic policeman standing at the side and I merely thought to ask him about it as I wasn’t sure which direction I was to go. Now note that I have learnt from young not to fear the police and it is customary for me to converse with them. I have always felt of their sacrifice to serve others in the community and have even participated in fund raising events by the Lions Club for the police to help their families. But on that afternoon, the policeman looked at me with almost the same type of face the bus operator did before assaulting me and even shouted out some rude remarks to me that I couldn’t understand. As a habit, I would always take a photo of any event or occurrence that is unusual before me but due to the bus incident, I took a quiet shot of the man from the side, unknown to him for I really felt the fear that if I took a snap shot right in front of him, he would have pulled his gun out and shoot me! Honestly as he looked very angry for some reason and in my mind I just related it to a fear of something unknown to me.

In Chinese, they say a street or area is ‘dirty’ to mean evil spirits still haunt the location to cause mishaps to other living beings going by the area. Well could that be the reason why within a short period of time, I could take the following photos in the same area.: 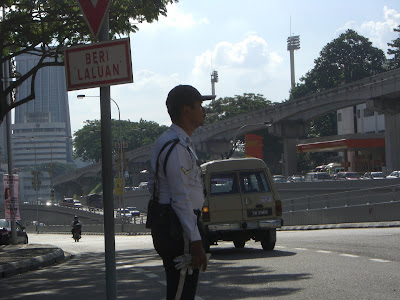 Here is the side shot of the angry policeman staring at the chaotic intersection after he shouted rude remarks to me when I asked him politely if there was a detour of the road ahead of me. (11th June 2008) 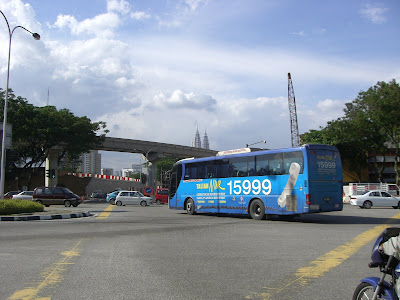 Take a look at the chaotic looking intersection with a bus trying to cross with the cars still passing in front of it. Could the scene have made the policeman so angry? 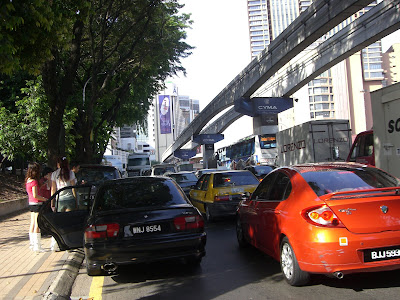 When I passed the intersection and got further along the road, I found two vehicles involved in an accident with each other. The Proton car behind ramped into the front vehicle as pictured above and the little accident only caused greater congestion on the already congested road that began at the chaotic intersection. 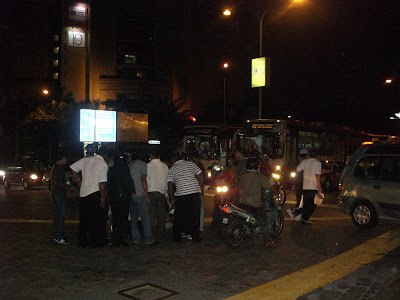 Just ahead of the accident area on the road is the Pudu Jail and Times Square intersection. It was just the next day in the night time that I travelled along the same road and found an accident had occurred at that intersection. A motorcyclist ran past the red lights and was hit by a car coming by on the right of him. A crowd gathered immediately after surrounding the victim. (12th June 2008)

From adversity comes some good 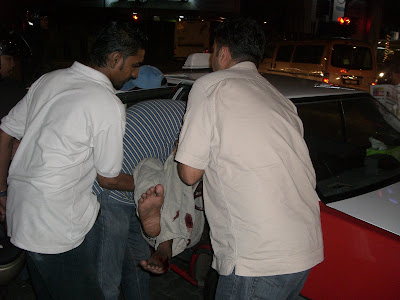 The victim was in critical condition and needed to be rushed to the hospital. A good Samaritan taxi driver stopped and the rider, still bleeding with blood stains on him, was carried into the taxi 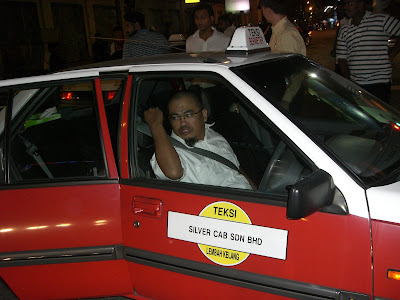 I managed to take a good snap photo of the driver, a real hero of our streets in Kuala Lumpur 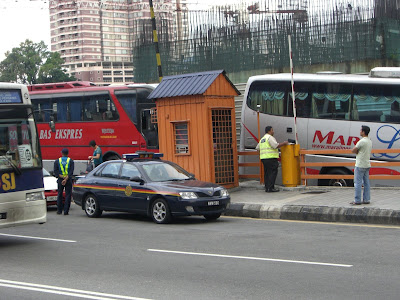 A month plus after my bus incident at the Pudu Raya station, I happened to pass the station again and noted that there was a JPJ or road transport department vehicle parked in the area doing some surveillence. (24th July 2008) 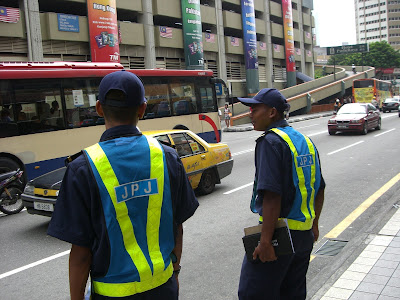 A month plus later (5th Sept 2008) I passed the area again and saw many JPJ officers patrolling the street outside the bus station. I felt pleased that the authorities could be responding to the negative publicity from my 'costly bus send-off' experienced publized in the press plus I had also personally called the enforcement unit of the JPJ regarding my incident after making the police report. 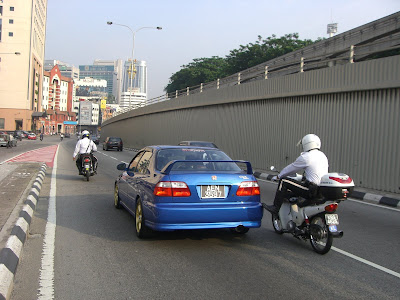 As for the police officer with his rude remarks, I never bothered to complain about him. I was pleased to note that two policemen on Jln. Maharajaleela, just a stone throw away from the busy intersection where the rude policeman stood previously, were found helping a stalled car stuck on the busy street to move along. I even got off my bike to give them a helping hand to push the car and once the car got going, the force of the policeman's bike using his leg, pictured above, kept it rolling to head to the side of the road. Well that was my Good Samaritan deed for the day together with the other two policemen and I'm glad to know that the one rude officer could be just the odd bad apple that ruins the whole basket. (1st Aug 2008)

The beauty in the basics of democracy is that there is mutual respect, ability to enjoy harmony in diversity and to agree to disagree. What is theory is of course not always the same in practice but in the case of Malaysia, I must say that the freedom I experienced living in what the world regards as a developing country is comparable even to some of the advanced democratic countries of the world. When I talk about freedom, I'm specifically referring to freedom of mind to believe what I choose to believe in, freedom to move around freely and safely in the country and with a freedom to chose my vocation and lifestyle with a choice of goods and services available in most other countries and perhaps even more. My feelings that the freedom I had experienced in Malaysia is comparable to America was shared in an early day post here.  I stated that perhaps the well-defined laws in the US created the environment of mutual respect of its citizens. In Malaysia, I believed t
Read more

2014 Film on some political history of Singapore: Film banned in Singapore, "To Singapore with Love" From the film's website www.tosingaporewithlove.com . I happened to be at at an international conference in Kuala Lumpur where Ang Swee Chai , wife of the late Francis Khoo was present. I had a chance to share my views recorded in a video  here.   27 Feb 2012 A peek into the life of Chee Soon Juan , a Singapore Politician ( Wiki info ) 2015 Tharman Shanmugaratnam (SG), Deputy Prime Minister & Minister for Finance of Singapore Topic Leader: Stephen Sackur (GB), Presenter, BBC HARDtalk The recent departure of Lee Kuan Yew, the founding Prime Minister of Singapore on 23 March 2015 sparks of the beginning of this post and probably the ending of my writings on world and local politics. It started with the objective of seeking optimal answers for resolving current world problems of people living in their own countries to find peac
Read more