The formula Performance = Abilities + Circumstances + Motivation rings true for many in life.

It appeared that my natural abilities were not useful when I had to leave home to be formally educated. My development was slow in the beginning as it took time for me to adjust from my natural way of learning to one that was based on tests or the punishment and reward system, which never motivated me then nor to this day. I remember the strict school that I was transferred to where at every year end, the school principal would have all the classes in the same level to assemble in the school hall. The names of the top students would be called and they would appear in front of everyone to receive a standing ovation. Then when all the clapping was over, the boy who failed the most subjects and was last in position in the whole level would be called to appear. He would receive a stroke of the cane from the principal for every subject he failed. For some reason, this boy who wore a turban, being the son of a bank guard who was a singh or of the sikh faith, would always be the same boy who would be called up each year to be caned. It had always crossed my mind that the punishment never helped him improve his grades and the same boys would always be the ones called to receive the standing ovation. I therefore conceived the opinion that the system of punishment and reward, at least used by the school, was flawed as a motivation factor for anyone to do better.


In school, there is a set pattern of learning and due to the large numbers of students, the way is such that you go through the education system rather than education really go through you, understand the difference? If you really wanted to be ‘educated’ in those days, there was no other choice and even in these times, the choices are more limited in a developing or third world country. Mind you as I write today, I am fully aware of 1st world countries who repeat for students today with what they thought made them successful in the past. ( View from an Autistic with his own website. ) I took time to develop the abilities for me to perform in school but circumstances and self motivation pulled me through. 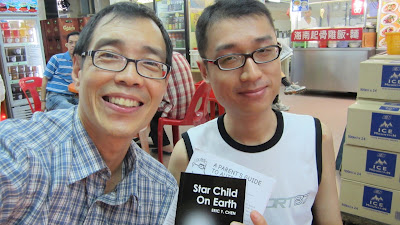 Here is Eric Chen, whom I met in Mar 2013 in Singapore, author of 'Star Child on Earth' who is autistic with his view and website link quoted above. The contribution of different minds in society can be viewed in a series of Ted videos here.

In my home, I was the youngest of seven and the fifth son. All my older brothers were graduates and some even recipients of distinguished scholarships such as the Colombo Plan scholarship. I guess I didn’t have much choice to how I was to be educated but it was initially a slow and some times painful process. I recall when I had problems with mathematics the mistake was approaching my father for help. Though he was very good in it as a qualified land surveyor with a topographic engineering degree from Europe, he wasn’t the most patient man to teach his slow learning son who ended up in tears of despair. Fortunately there was no direct strong pressure from my parents to study or succeed in school and they were to my memory mainly facilitative towards my progress by making sure I had a good stable environment and to be in a reasonably good school. I had to find my own motivation and I believed that not wanting to be the only drop out son of the family was probably the strongest reason. I think the Chinese culture of ‘saving face’ or having a strong personal pride became the motivation factor for me to push myself to perform well.

So I would push myself to try and not cry as circumstances improved for me. I was put in a better school of a higher standard of education with better teachers and students whom I could pattern after. I acquired the ability to go through education and get whatever I wanted. However I am not sure to this day if education really went through me for I cannot remember many of the things I had rote learned. Instead the thing of most value to me that I will never forget is how to balance my heart and mind to adapt to any situation and be able to do your best. (My Heart and Mind. For PC view) Like the way I learnt language and music, I used my subconscious mind to learn how to balance my Heart and Mind to adapt to any situation. My consistent research today in Optimal Performance and Thinking is only to make my subconscious processes more palatable to the majority who have a preference of using the conscious mind to learn. For instance, as you are reading this journal, you are being bombarded by an awesome number of stimuli: sights, sounds, smells, tastes and kinaesthetic (or feeling) signals. Scientists estimate that the number of such stimuli is around the 11 million mark. Your conscious mind is capable of dealing with about 40 stimuli at anyone time, so an extremely large percentage of the 11 million is left unaccounted for. So the unconscious mind will be dealing with some number of them between 40 and 11 million (Source: Philippa Davies: Eureka! - Hodder and Stoughton, 2004-) It is my hope that in my continuous efforts to understand and explain the processes of the subconscious to attain the optimal state, the abilities of many will increase to better succeed in the changing world today.

The beauty in the basics of democracy is that there is mutual respect, ability to enjoy harmony in diversity and to agree to disagree. What is theory is of course not always the same in practice but in the case of Malaysia, I must say that the freedom I experienced living in what the world regards as a developing country is comparable even to some of the advanced democratic countries of the world. When I talk about freedom, I'm specifically referring to freedom of mind to believe what I choose to believe in, freedom to move around freely and safely in the country and with a freedom to chose my vocation and lifestyle with a choice of goods and services available in most other countries and perhaps even more. My feelings that the freedom I had experienced in Malaysia is comparable to America was shared in an early day post here.  I stated that perhaps the well-defined laws in the US created the environment of mutual respect of its citizens. In Malaysia, I believed t
Read more

2014 Film on some political history of Singapore: Film banned in Singapore, "To Singapore with Love" From the film's website www.tosingaporewithlove.com . I happened to be at at an international conference in Kuala Lumpur where Ang Swee Chai , wife of the late Francis Khoo was present. I had a chance to share my views recorded in a video  here.   27 Feb 2012 A peek into the life of Chee Soon Juan , a Singapore Politician ( Wiki info ) 2015 Tharman Shanmugaratnam (SG), Deputy Prime Minister & Minister for Finance of Singapore Topic Leader: Stephen Sackur (GB), Presenter, BBC HARDtalk The recent departure of Lee Kuan Yew, the founding Prime Minister of Singapore on 23 March 2015 sparks of the beginning of this post and probably the ending of my writings on world and local politics. It started with the objective of seeking optimal answers for resolving current world problems of people living in their own countries to find peac
Read more